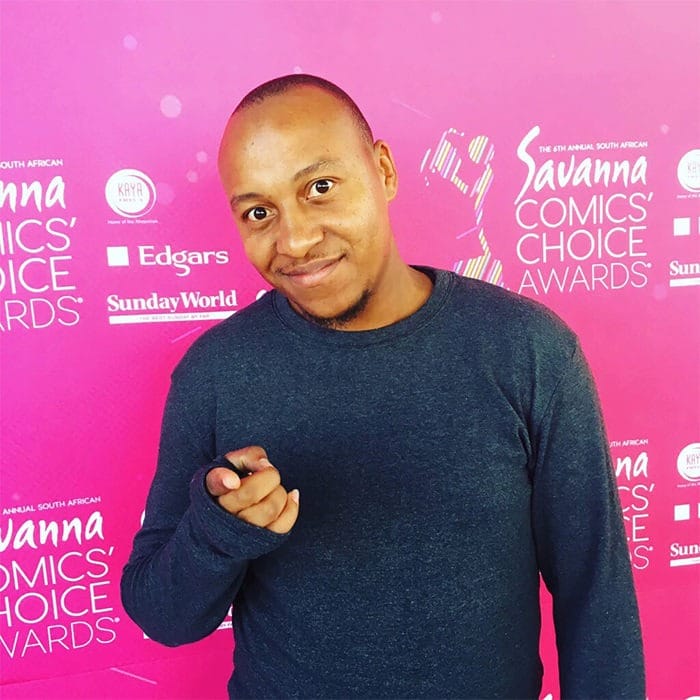 Thabiso Mhlongo is a an professional stand up comedian whose calmness and storytelling continues captivate audiences all over Johannesburg and South Africa.

He started out professional stand-up comedy in August 2014, but his meteoric rise within the comedy ranks continues to further imply that he is destined for greatness at the highest levels of Stand-Up comedy.

Thabiso also has appearances on Television, as an acting and presenter, He has a number of extra and featured roles with some of South Africa’s most recognizable Television shows, and has a resident presenter slot on a segment called The Sin Bin every Friday on ANN7’s Game On sports show

Currently living in Braamfontein, Johannesburg Thabiso was born in Barberton, Mbombela and is a holder of a Sports Management National Diploma.

His describes his style as alternative and funny, conversational with a touch of genius, versatile as he does his jokes in mainstream language(English) and vernac, one liners and the likes, His growing reputation is indicative of his work ethic, desire and talent, all which have contributed to his rise from a nobody to a respected stand-up comedian.

Despite his short time on the block, Thabiso has found himself in a space where he is able to impact the local comedy and entertainment scene after having feature on MTV’s #YouGotGot and as a Fashion street Referee and a cameo role on E-Tv’s The Alliance as a Delivery Boy, as well as being invited to CliffCentral on their Gas Comedy Podcast on the regular, and performing at the Savanna’s Comics’ Choice Newcomers Showcase in 2016 which later aired on VuzuAmp.

In 2016 he won Comedy Central’s Grab The Mike Competition, which is an elite competition featuring the country’s most prominent upcoming comedians in Africa, in the same year he was invited to be a part of the comedy central Roast Battle Episode 5 on October which he won, In the same year he was a part of the Comedy Central Grab The Mic Finale and Comedy Central Roast battle Finalist ,he is also a constant feature at the Tshwane Comedy Nights in Pretoria and is the Creative Director of Premium Comedy SA, which is a leading comedy talent company in the land having assisted in launching comedy careers of a lot of South Africa’s top talents such Trevor Noah, Loyiso Gola just to name a few.