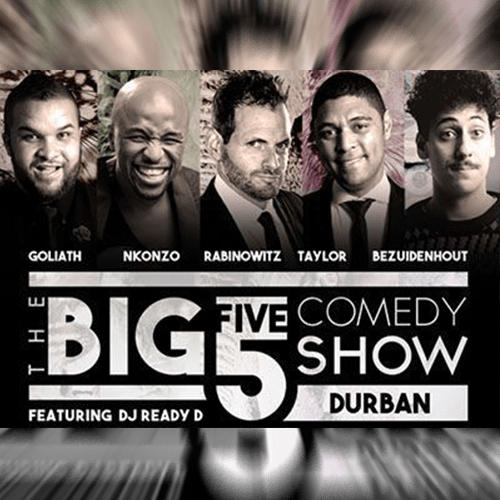 They are the titans of South African stand-up comedy and they will be raising the roof when The Big 5 Comedy Show proudly returns to Durban in September for 1 night only.
It`s an opportunity to spot the likes of Jason Goliath and Schalk Bezuidenhout face off with Stuart Taylor or hear Nik Rabinowitz and Tats Nkonzo roar in a wildly hilarious show which take place at The Globe at Suncoast on the 7th of September. In addition, The Big 5 Comedy Show won`t be complete without the legendary DJ Ready D who creates an electric atmosphere with his scratching and mixing skills.
Collectively these comics have some of the most impressive resumes in South Africa. From appearing on local and international TV shows and starring in movies, to performing comedy shows that pack out festivals and theatres across the globe, this is an ensemble quite unlike any other. The Big 5 Comedy Show was a sensation last year and this year it will be another not-to-be-missed comic affair.
The Big 5 Comedy Show takes place at the The Globe at Suncoast, Saturday 7th September at 8pm. Tickets start from R150 to R250. The show is rated PG 16